“You should be dead,” she whispered.

“Should be, would be, could be; but still am not, more’s the pity.” He pulled her to her feet with her good arm and did not miss her sharp intake of breath. “Your two minutes is up,” he said with quiet derision, “but I find I’m feeling generous. If you can stab me with your bad arm and your little silver blade over there, we’ll call it quits.” He let her eyes follow his as they directed her to the fallen dagger, glinting forlornly in the soft moonlight with a freshly honed blade that would melt through flesh and bone.

When she hesitated, he reached for the knife himself, but his hellcat surprised him. Flipping her body over, she cradled the dagger in her good arm and spun it around to slice through the pale skin of his throat.

Again, she did not achieve the desired result. The blade merely scraped against the hard stone of his neck, and when she drew the edge back, she looked at the dulled surface in horror.

Grasping her fractured arm, he pulled her towards him and let her bitten-off scream warm the hollows of his mind. “You cheated,” he accused her, his grip on her arm tightening.

“You lied,” she reposted, wrenching herself painfully out of his grip. “There was no possibility of your death this evening, was there? You are far too old. Older, even, than they say you are.” Her expression was bleak and her face had taken on an unnatural pallor, but there were still twin shards of fire blazing from her violet eyes.

“I did not lie.” He sighed softly. “I had hoped that my body had not hardened into one of the Masters of my kind. It appears that you are too late, however, to put an end to my suffering. So, in order to entertain myself in the light of my new knowledge and misery, we shall begin to put a start to yours.” He paused, lost in thought for a moment, before his cold face took on a smile of sorts. “If I am to take on a bride as the first of my new children, it would be wise to start training her in the art of pleasing me, would it not?” His eyes were now dark voids of immeasurable power, and he directed them towards her. He painted an image in her head of what he wanted her to do to him and let her feel the insidious pull of his insurmountable will as it surrounded her like a shroud.

“No,” she whispered as his thought bloomed in her head like a blood-red rose, surrounded with thorny spikes. He projected a vision of perfect beauty polluted with the seeds of evil, for there she was, on her hands and knees, crawling towards him. There was no thought in her head except the desire to please him. Mud forced its way beneath her fingertips as her body ignited in flames of heady, potent arousal. Her breath ran short and her limbs quivered as she sought to reach the inverted V of his legs. She wanted him with all-consuming passion, and the emotion scared her. He had her hands running up the soft wool of his trouser legs, and she threw her head back, letting her red hair cascade in a curtain of soft waves as pleading words dripped wantonly from her lips. They were dirty words, hateful words, words of carnal sin, but it mattered not. Her whole body ached to see his naked flesh and feel her lips upon the most delicate part of him. Oh God, oh God, oh God.

Whimpering under the image he had planted in her mind, she tried to shake her head to get rid of it, but he had locked her whole body in a state of paralysis. Fear flooded her as his visualisation continued. Her hands continued their exploration, finding the hard, long length of his manhood, captured and restrained within several cloth boundaries, and her need to free him increased. She caressed him with her fingertips, gripped him softly in her hands, and ran her soft, wet tongue along his fly before letting the tips of her teeth nip lightly at the head of his covered cock. Her hot breath spilled over him, and he jumped and pulsed underneath her. The ache in her loins grew. She could feel moisture pooling between her legs and a gnawing hunger that could not be appeased with anything less than his domination of her body. Body, mind, and soul – everything hungered for his touch. No! Another whimper left her as she continued to fight his control and tried to think of anything bar the images he was propelling into her brain. A crucifixion cross, her mother’s face, the setting sun on an ocean of tranquillity; all of these images managed to flutter across her eyes before he pushed them roughly away and forced her to continue with his monstrous vision.

Her body now made its way up his, hands taking a gentle hold of his balls as she palpated them softly in her fingers. Her teeth found the shiny buckle of his belt, and her tongue lapped at the cold lines of steel before her teeth worked at the supple leather, anxiously trying to free it. Her hands encircled his waist before they impatiently pulled the dark fabric of both trousers and pants down his legs. As

his cock sprang up to meet her, eager for the touch of her lips and tongue, she cared not that they were in a semi-public place, and she didn’t spare a thought for her embarrassment at the possibility of being caught. She simply speared her throat with the beautiful, hot essence of male hood and worshipped him with her lips and tongue, too impatient to continue any games of teasing. He suddenly released her from his vision, and her jaw opened in a silent O of shock.

“Perfect. Come over here, and I’ll put that hole to good use,” he said with dark amusement. Her mouth snapped closed, and she stared at him, dazed and confused at her body’s response.

“Shall I make you do that, right here, right now?” His voice was a seductive whisper on the breeze, and it entered a head that was in turmoil. She had to choke back the immediate answer of ‘yes,’ which wanted to burst from her lips before she managed to issue him with a, “Go to hell.” The energy she had to expend to get those three words past her lips took all of the fight out of her. He laughed, a soft, throaty chuckle that had her body clenching in desire. 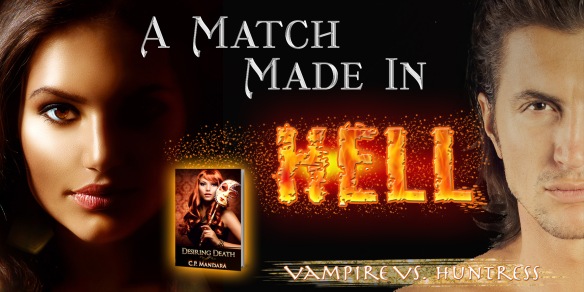