Welcome to Scintillating Sunday – the blog hop with more ‘Mmmmm.’ This week, I’ll be showing you an excerpt from ‘The Ties That Bind.’ Brace yourselves – because as per usual – it’s NAUGHTY!

Marianna was nearly delirious. The whole experience was as surreal as a Salvadore Dali painting. She was stretched out on a glass table, without a stitch of clothing to her name, in front of a few hundred people. She wasn’t the only one. There were several more women in just such a position as she, splayed out wide and being covered in various different colours and textures of creamy goo. They were being licked, sucked, nibbled, suckled and some parts of them appeared to be being swallowed whole. The entire room was now a zoo of rabid males, and it appeared someone had unlocked the cages and freed the animals. The room reeked of sex and sugar. Marianna’s nose had tuned in to the sweet smells, and she inhaled tantalising breaths of vanilla and chocolate that sent her senses reeling, which drifted across the table with each swish of Mark’s fingers. He had a two-fold use for the slippery custard that he was painting against her sex; it made a great lubricant and apparently tasted rather pleasant for his mouth lingered against her sex again and again… lapping at her body with the gentlest of touches. For the girl who thought she never wanted another orgasm again in her life less than a half an hour ago, she was now on fire. This new ordeal was hell on wheels and having witnessed all the artistic delights that now graced the table, she desperately wanted to taste them. Her mouth was watering for a morsel of syrupy sweetness. There was always a chance Matthews might have to tie her down in a moment, because if she saw him dipping his finger in the salted caramel with no intentions to share, she would not be responsible for her actions.

“And now for a spot of crème brûlée, I think,” said Mark, who had his little wooden spatula in hand and was carefully scooping up a generous portion of warm pudding. Bringing it up to Marianna’s face, he let her watch the little wisps of steam that rose from his prize. He waved it in front of her nose and she whimpered. “Want some?”

“Yes please,” she said vehemently. It was about time. Being teased with sugar was evil in the extreme. “Then I shall fill you up until you can take no more, Miss Morreau.” Marianna did not like the downward turn of Mark’s eyes, and she also did not like the direction that the crème brûlée was headed in. She whimpered out in protest as her taste buds suffered the woes of denial, watching the mouth-watering creation head south and far, far away. Her fingers clawed into fists as she briefly wondered what the punishment would be for flipping herself over and hogging everything on the table.

“Do not even think about it, Sweetpea. I assure you the ramifications of such an act would be grave indeed.”

Marianna banged her head down against the glass with a little more force than necessary and groaned as she felt the custard being fed inside her, spoonful by warm, sludgy spoonful, and she wanted to howl at the unfairness of it all.

“Don’t fret, Pumpkin, you’ll be getting a taste of it in a minute because after I’ve filled you up to the brim, I’m going to make you come and then I’ll feed you the left-overs, if there are any.” He gave her a wicked grin and patted her stomach soothingly as he filled her sex full to bursting with everything the table had to offer. Spatulas and spoons scraped gently against the inside of her pussy walls and with each further delivery of liquid goo, the tension in her body escalated. It got to the point where she was sure that she couldn’t be made to take another spoonful, but still he continued. When he finally let his implements fall, it was a strange, full feeling that encompassed her body and it made her go weak all over.

“Now, it’s time to make that cream just a little bit creamier, Miss Morreau.” Mark’s hands reached up her body, leaving smears of chocolate and custard in their wake and he rubbed the pad of his thumb roughly across her lip, before slipping it into her mouth. “Suck, sweetheart, and I promise I’ll let you swallow in a minute.” She needed no further encouragement. His thumb was coated in raspberry sauce and tiny morsels of gooey nougat; that was about the extent of the ingredients she could pick out. Everything else blurred into the most fantastically decadent, melting extravaganza on her tongue. Her mouth curled greedily around him and sucked tightly. Meanwhile, his lips had descended to her nipples, and he gently stroked them with his tongue. As his teeth grazed a proud point, she gasped and gave a tormented cry of pleasure, her body arcing up off the table. Repeating his tactics, over and over, he then added his fingers for good measure. As soon as they hit her clit she was a mess. Everywhere was a seething mass of over-stimulated nerve endings that wanted to do anything except feel. Alas, they didn’t have the luxury of that choice and it was just as well, for the impending release was gearing up to rival an antimatter explosion. While Matthews had his work cut out for him trying to get her body anywhere near an orgasm, he certainly seemed to be heading in the right direction. The things he could do with that tongue… He knew exactly where all the sensitive spots on her body were. Her neck, behind her knees and her abdomen were treated to the lightest of kisses that tormented in the extreme. One hand had its fingers tangling in her hair and stroking her scalp, and with the other he continued to maintain the pressure upon her clit, using the rest of his fingers to caress the smooth expanse of her mons. She wanted to scream, but the sound seemed to have been tied up inside her with a tight knot, and she could not edge it past her throat. Fingers, tongue, lips, hands… They pulsed, tugged, stroked and feathered all over her body, and watching Mark’s deep brown eyes stare into hers as he assessed her reactions to his manipulations made her doubly aroused. Before you leave, have you entered my Rafflecopter? There’s fluffy black HANDCUFFS, a bright red FLOGGER, a signed paperback copy of THE RIDING SCHOOL and some custom swag 🙂 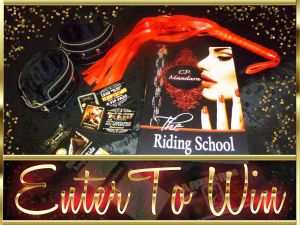 Kisses, Caresses, Whispers in the Night

Wake Up Your Wild Side ~ Gale Stanley