Hello and welcome to MOAN DAY! I’m a happy girl today – THE TIES THAT BIND has just been released on Amazon – Woohoo!

Want a copy? Grab it here. Right, if you’re after a spot of naughtiness, we have lots of it… take a little peek below 😉 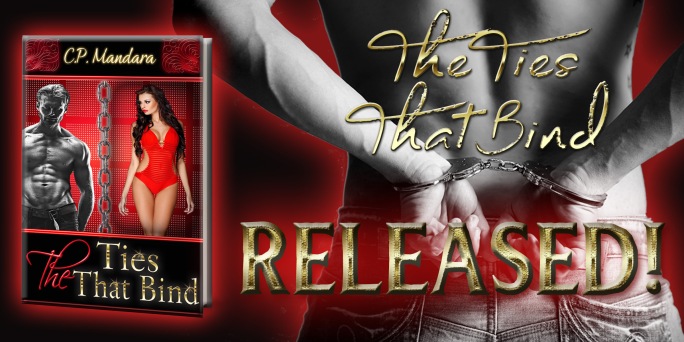 When Mark Matthews had told her she would be spending most of the journey asleep, she had assumed he meant naturally, as in an exhausted slumber. It hadn’t worked out quite that way. Someone had thrown a blanket over her cage and two sets of hands, possibly three, had hoisted her outside. The cage swung violently in their hands and they were not gentle. Pricking her ears up, she used what little of her senses were left to her, but there wasn’t much to hear. The sound of a large rumbling engine drowned out everything else and she knew that was inevitably where she was headed. Onwards to the abode of Leyland Forbes, wherever that might be, and it was unlikely that anyone would tell her. She was nothing more than chattel to any of the employees here. Albrecht had more respect for the animals than the human slaves they housed, as Jenny had found to her chagrin. The King of wacky bondage, that’s what they’d said. The man would probably do something utterly bizarre with her body and then deliver her back to Albrecht. Oh God, that couldn’t happen. She could not go back to Kyle, not after what had transpired. Someone would have to commit her to the nearest mental institution if she ever came face to face with that man again.

A painfully sharp prick took her by surprise and she bumped her head into several wire bars above her as she tried to avoid the vicious object that had been sunk into her upper thigh. No such luck. There was another second of pain as someone slowly depressed what had to be the plunger on a hypodermic needle. Jenny shrieked out her displeasure at such treatment, but the shock collar she wore gave her a vicious bolt of current, and all she managed to get for her troubles was a stream of male laughter and a couple of slaps upon the top of her cage. Someone said, ‘Calm down in there,’ and she only just managed to stem the growl that wanted to erupt from the deepest part of her lungs. Another said, ‘She’ll be calm enough in a minute, I don’t think she’ll give us any trouble on the journey down.’ This was met with more laughter and Jenny had a hard time controlling her anger, not that there was the slightest chance she would find a vent for it. The sound of retreating footsteps and the rustle and slam of a large, corrugated loading door indicated that she had been sealed inside the vehicle and then her whole world went black. The engine shifted up a gear and there was a brief pause, probably as the driver or drivers were getting ready to move out. Jenny waited for her eyes to close and sleep to overcome her, for that was what she assumed they had drugged her with. Damn. That would make it two times this week that she had been sedated. As the truck roared into life and took its first shuddering sways forward over the gravel, Jenny felt her head spin. The stuff didn’t act anywhere near as quickly as they had you believe in the movies. It was frustrating because there was nothing more Jennifer Redcliff wanted at this point in her life than complete and utter oblivion. When it finally came for her, it wasn’t a moment too soon.

When the sedative finally started to wear off, Jenny was unamused to find herself still in transit. Whilst her cage had been anchored to the floor by means of several long nylon straps, she had not been, which meant that every time they went round a corner she ate metal bars. You’d think there was some kind of race in progress judging by the velocity the bends were being taken at. As she was slammed into the side of the crate for what must have been the twentieth time, she felt the air leave her body in a rush, before she was rudely deposited back in place as the lorry evened out its weight once more. Breathe. Keep breathing. One small step at a time. Hah. She was in a cage for Christ sake! She could barely move. It was most certainly time for a hissy fit, if she could summon up enough enthusiasm. Actually, scrap that, she thought, for it would most certainly involve tears and noise and the collar around her throat wouldn’t allow such niceties. Matthews would get her out of this. He wasn’t a complete bastard. He would work something out and they could take it from there. She’d do his housework, she’d play his naughty games and the first opportunity that presented itself for escape, she’d take it. Jennifer was nothing if not resourceful. Where there was a will, and there certainly was a will, there was a way. She might play his games for a couple of weeks or so at first, though, because the man had created a nasty itch within her body that was going to require some impressive scratching. Sharing his bed for a little while was not going to be a hardship, unless she was much mistaken. So, the good news was that she might only have to endure this hell for a few more days before she could get out of the rabbit hole and enter some kind of normality. One where she could clean her teeth at night, eat decent food, take a warm bath, and have the occasional conversation. Jenny had no idea how much you could miss the sound of your own voice when you were continuously refused the use of it. She was seriously beginning to go some kind of crazy inside her own head.