Hello Spankettes, Spankoes and generally happy Saturday people ;0) Yes, it’s the weekend and there’s reason to celebrate. The Ties That Bind has been shipped off to Chimera Books and we’re aiming for a release on the 14th September. WOOhOO! The Ties That Bind

“Relax, Marianna. Believe it or not, there’s a really good reason I am going to get you horribly sticky and messy. Do you want to fathom a guess as to why?”

She did not, but his gaze continued to feast down upon her until she became so uncomfortable she couldn’t help but blurt out an answer. “You’re going to use me as fish food and dunk me in the aquarium?” Marianna’s reply was somewhat dry. The frozen cheesecake was not. It was beginning to melt against the small of her back and it was a most invigorating experience.

Mark grinned and looked up at the immense aquarium that decorated the whole wall to the back of the bar. The fish had become quite excitable as the night wore on, much like the patrons of the bar, and were darting around with considerable enthusiasm, blurred colours weaving in and out of the seaweed and rocks. “Nice idea, but wrong guess.” Moving his Perspex stool closer to the table, until he was resting in-between the middle of Marianna’s legs and his face was just inches away from her sex, he blew a little tickle of warm air upon her swollen clit.” She groaned in heat and he couldn’t resist a wolfish grin. “The messier you get, young lady, the more time it will take me to clean you up.” He picked up a dollop of caramel sauce and let it dribble from his spatula to land in little ribbons upon her immaculately smooth pussy. “There are no showers in this building, sweatpea, and there is only one way to get clean. If you can hazard a guess as to how you’ll get clean, I might try my best to ensure that you have only one orgasm, rather than several.” He picked up a chocolate cigarello and twirled it around in his fingers before sucking softly at the tip, letting the heat of his mouth melt the soft and wondrously smooth chocolate. Then he transferred his new, makeshift pen to her abdomen.

(Did anyone count those sentences? It was eight, right 😉 ) 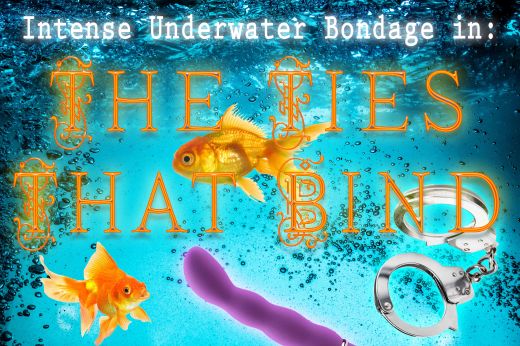 9 thoughts on “#SatSpanks – #CoverReveal for THE TIES THAT BIND!”