Hello Sunday! It’s the second best day of the week, didn’t you know? Today, we’re off to Vampire Land for theatrics and… naughty fun! 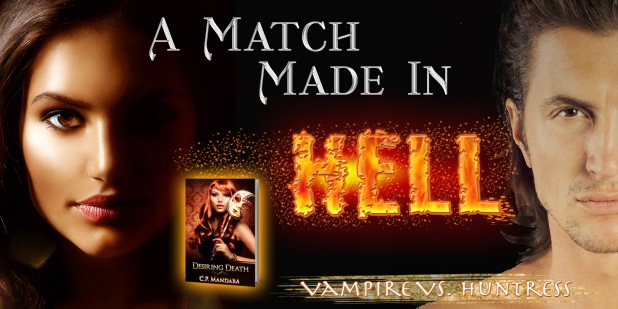 “Lovely evening for a stroll, Duchess.” Martinet’s voice, sharp and sardonic, broke the lovers embrace abruptly. There was a shocked gasp, a twist of an elegantly aristocratic head and a glint of light upon a slightly elongated canine. Violetta wanted to scream. Castello Verde was full of the undead this evening, and here she was, one of the most famed vampire huntresses of all time, having been rendered more helpless than a baby. She could not even utter a sound.

“Damn you, Martinet. You are disturbing my dinner plans, wouldn’t you know.” A long, pink tongue darted out to caress her fang before she took a deep, calming breath. “I see I am disturbing you also. What have you got there, Michel? Some tasty young morsel with which to do your worst? Perhaps

we should share?” The mischief and malic combined in her voice put the fear of good into Violetta and if they hadn’t, the duchess’ next words would have.

“I’ve heard you like to make a mess of them. Blood and gore everywhere, isn’t that right, darling?”

Violetta wanted to cover her ears and scream. Was this to be the end of her short-lived career? Ripped apart under the cover of darkness by two, mean-minded bloody-thirsty vamps?

“Sorry, Maggie, but you’ll have to search out other avenues of amusement this evening. I have plans for this one. Lots of plans.

The Duchess’ eyes narrowed and her eyes sought out Violetta, pinpointing her with perfect clarity in the almost non-existent light.

“The one and only,” came the ironic reply. “As it happens she walked right into my lap, trying to kill me, of course.”

The Duchess’ hand shot up to cover her face as she smothered a snort of amusement. When she had managed to get herself back under control, she said, “You know that the odds were two to one as to whether you’d make it through tonight alive?” Her eyes twinkled with mirth.

“I had heard the figure mentioned, oh ye of little faith.” He gave her a faintly mocking look and winked at her.

“Oh, don’t look at me. I told them there wasn’t a woman alive who could take you down. They all fall panting at your feet, don’t they, Michel? Out of curiosity, though, now that you have her, what are you doing to do with her? Plate her up and suck her dry?”

4 thoughts on “#ScintillatingSunday – Plate Her Up & Suck Her Dry! #Vampire PNR”