It’s Monday again! Have I got the Monday Morning shakes? Yes, but it’s going to be OK because I’m only a few seconds away from delicious naughtiness! Today we’re talking about cream… in a manner of speaking 😀 You’ve been warned…

As Jenny had come in last, there was only one pony-boy left and she was damned if she could figure out why he’d been unclaimed. His body had muscles stacked one on top of the other and, keeping with the Roman theme, a Gladiator would have been proud to call him friend. Angling up to him, she began to wonder what the hell she was doing. Rescue would be coming soon. It would be here. The question was: would it be in time to prevent her crawling through a field of nettles? As she had no idea, the safest option was to play their game for the time being. It was no great hardship. She’d always enjoyed giving head. Normally, she liked to play a different game and see how long she could drag their orgasm out, but the challenge of making the burly pony-boy in front of her come within a few minutes was an inspiring one. Once she clamped her little jaws around his cock and began to work him over, he’d be chomping upon his bit. Which reminded her, sucking cock was going to be a problem as she still had her rubber bit between her teeth. She would also be required to kneel and that was going to be interesting with her brand new, leather, thigh-high pony-boots. Jenny needn’t have worried because a flurry of grooms came up behind each pony-girl, in the order they had finished the race, and began removing their bridles and lowering them gently to the ground. The sound of leather, creaking and groaning, could be heard everywhere for several seconds, but it wasn’t long before slurping and sucking noises swiftly overtook them.

Even though Jenny was the last to begin sucking, she had little doubt that she’d achieve her goal. She’d had lots of practise, after all. Clamping her jaws around the magnificent member in front of her, she slowly lathered saliva around every inch of deliciously swollen, silky flesh. There must have been a good nine inches to lubricate, so she worked as fast as her lips would allow. He was quite a mouthful. Starting with long, swift strokes, Jenny tried her best to deep throat him. It was nearly impossible because he was just too big, in both the length and the girth department. She let her tongue flick along the underside of his penis. Her pony-boy coughed and his penis nearly flew out of her mouth. What on earth had happened? Pulling back in shock, Jenny discovered that his particular

cock-ring had a leather leash attached to it and someone had obviously just given it a good yank. Ah, that would be the evil Mistress then. Diving straight back on the straining flesh in front of her, Jenny let her eyes wander downwards and running up her pony-boy’s inner thigh was the pointed tip of a high-heeled leather boot. It was angling towards the poor boy’s balls. Jenny angled her face more squarely on her target and was rewarded with a sharp nudge on her chin, but at least she still stood a chance at making him climax. Pumping her head up and down furiously, she let her tongue flick around the head of his shaft, before letting it swirl and dip into the middle. She adored the lovely, salty taste of pre-cum. Before she had a chance to savour it further, a sharp crack resounded through the air. The poor guy jerked cruelly backwards and Jenny nearly took a bite out of him, just managing to sheath her teeth. He wasn’t the only one getting a hard time, though, because there plenty more swishes and smacks that could be heard in the background, most of which were accompanied by heavy groans. She’d been concentrating so fiercely on her task that she hadn’t heard them until now. 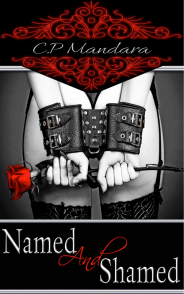 Jenny increased the speed of her sucking and waited for a reaction. A single grunt was all the reward she had for her troubles. She sucked tighter. He didn’t move a single one of his many muscles. She sucked harder. Finally she had her groan, but his cock was once again yanked from her mouth and his backside was cropped, judging by the fierce thwack that she heard. Then, an almighty roar sounded to the left of her and out of the corner of her eye, Jenny could see another pony-boy’s cock pumping its load into the back of a competitor’s throat, over and over. When he’d finished, the pony-girl in question slowly drew her mouth down his cock and kept her lips firmly closed. So, someone had their prize. It spurred Jenny on to new heights. She dragged her cock right to the back of her throat and slammed her jaw against him, ignoring the gagging that ensued; again and again she bounced her throat off him, faster and faster, twisting her head around his cock this way and that to get a good rhythm going. She had another drop of pre-cum to savour for her efforts. There was another roar, another jerking body, but this time to the right of her. Jenny was beginning to feel like a miserable amateur. What was wrong with her guy? One after the other, the pony-boys began to shoot their load and buckle under expert female tongues but hers remained stubbornly aloof. It would be just her luck to have picked the man with balls of steel.

“Your time is up, fillies.” Sir Lyle clapped his hands to signal an end to the festivities. For some reason, defeat did not sit well with Jenny and she did not want to relinquish the cock inside of her mouth. “P, you slutty whore, let the boy go!” Sir Lyle grabbed a handful of hair from the top of Jenny’s head and had to use considerable force to pull her face off the pony-boy’s cock. “There, there, P. No hard feelings. You’ll learn.” He patted her rump condescendingly. Inwardly, she seethed. Judging by the manic look in Black Shirt’s eye, she sensibly decided that he was not a man to mess with.

Sir Lyle went down the line of pony-girls and inspected the contents of each of their mouths. Every single one of them, without exception, was filled to the brim with creamy, salty goo. Jenny was not amused. She had just been labelled the most miserable cock-sucker within the group. She didn’t even get the chance to pout in annoyance as Daniel quickly shoved her bit into her mouth and refastened her bridle. The other ponies received the same treatment after they had proved their worth.

There was another clap of hands and the pony-boys were led away silently. All had their heads dropping with defeat, bar the stoic, robust specimen of masculinity that Jenny had attempted to suck. He held his head high and his petite Mistress, resplendent in bright red PVC, was currently petting his back in an affectionate manner.

2 thoughts on “#MasturbationMonday – The #Ponygirls are #Sucking!”